During rush hour traffic today, I waited at the head of a line of cars for the signal light. And waited. And waited.

Success! -no, a left turn for the other direction.

Suc- no, a left turn for our turn lanes.

Two lines of cars, trucks, minivans on each side pulled out to the intersection then off to the north- and south-going lanes whilst we idled. Then, finally, we did get our light! -no, the intersection still filled with those drivers bending the Yellow Light Rule. And more drivers. And more.

At about the fifth or sixth car turning in front of me, the minivan with the green light, I drove forward. And yet, two or three more cars came on. I employed a trick I’d learned from driving in California and New York, and laid on the horn as they eked past the oncoming horde.

And was reminded of my main driving pet peeve: red light rushers.

BUT I do not see any reason to squeeze fifteen cars through a red (YES, it was red!) signal against heavy, oncoming traffic. Do they all have a death wish? Surely they aren’t all selfish idiots.

On some occasions when I’ve complained about red light rushers, my friends have hinted to lighten up. Two of my friends even admitted to the practice.

I think I draw reasonable lines. What do you think? Do you experience people driving like this, or do you experience more heinous practices? Should I live and let die; or continue my righteous crusade, aided by my trusty horn? 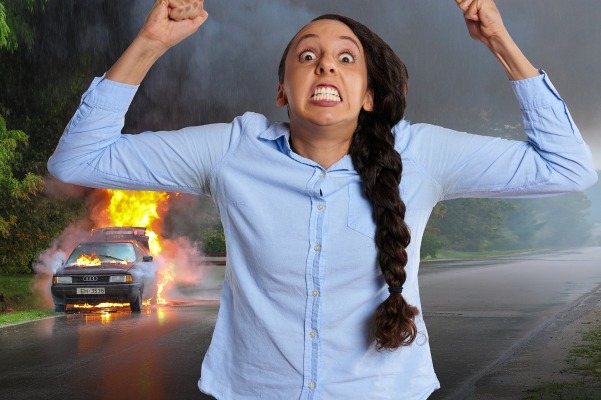 I’m calm. Really. And I wrote the following:
Wednesday, August 21: Wrote “Why Vacation if You’re a Stick in the Mud?” after a ‘fun’ family vacation.

Monday, August 26: An inspirational thought from the BBC’s Sherlock Holmes.

I also posted all this week at my motherhood site. I wrote “Picture Imperfect,” “The Beauty of Telling Children, ‘No,’” and “Mother, May I?”