Writing just ain’t what it used to be.

The point is that there is a lot of CRAP being dumped onto the web for a quick buck. 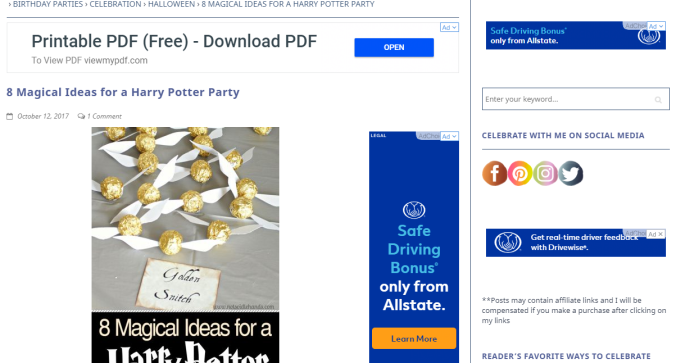 I worked for 9 months writing clickbait like, “You’ll DIG These Puppy Party Ideas” and “How to Flock a Christmas Tree.” Every day that I worked, I followed the same schedule: look at assigned topic, search l’internet for images, copy and save said images, paste and link back to images, then fill in-between the stolen images with text. SEO-heavy, keyword-laden, ad-interrupted text.

After the article requirements morphed into something impossible (and my kids were off for summer break), I requested a pay raise. The owner declined and we mutually split ways.

I therefore joined Freelancer. Look at all these jobs, I thought. I can do these jobs! …Then heard nothing in response to queries. Freelancer even lowered my rating because I bid too often.

One thing I did notice, however, was how many job opportunities were for writing “medical articles,” “technology reviews,” and “150-page books.” There, in the posting feed of freelancing, exists the dark underbelly of writing. Every need for any words is running through this sludge-producing factory; hundreds of requests a second.

It all made me sick. Plus, I was only approached for fraudulent jobs. I even had a potential ’employer’ deposit money into my account and have me start ‘working’ on a website. Yeah… he turned out to be phishing for me to have money deposited into my bank account for ‘art sales,’ and… yeah.

Freelancer refunded the processing fee after my money magically disappeared. I pulled myself out of the working pool.

Recently, however, I was approached by someone who sent me messages on Freelancer and on my public Facebook page. He had a job for me, even though I was confused who ‘he’ was. The picture was a blonde woman with a child who showed high-level testing results. The person writing to me, on the other hand, was a man from Bangladesh we’ll call Barshi.

He explained that he rented that blonde person’s account and that he bid on jobs then reassigned them to competent writers. I hadn’t had any success winning jobs on Freelancer, so I shrugged and took it.

After I finished, he sent me a message about what his main business purpose was: renting legitimate accounts from people with high scores. 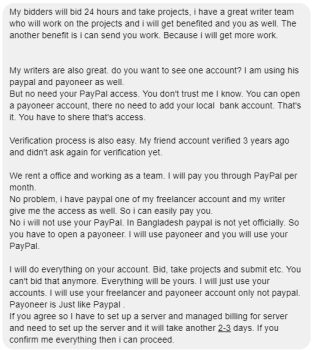 He asked me if I’d let him rent my account. He offered 100 USD a month for it, since I had somehow managed to score 100% on Freelancer’s English Level 1 exam (because I speak English. And I write English).

He asked me to do this dishonest thing at least eight times over the course of our communications, around instructions for other jobs. 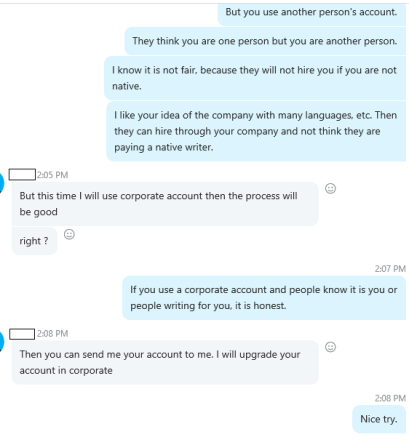 I quickly realized that his rate of $10/1000 words was not worth the time. A couple of the jobs he bid on were worth it, but it turned out that his rate was the same whether I edited a video script (15 minutes) or completely fabricated a person’s My Story for his/her blog (90 minutes).

I also learned that clients were not always clear in their instructions, and that working through Barshi made that part even more difficult. Despite crafting a My Story of 300 words from 12 phrases of ideas, Barshi came back and said the client hated it. The client said the sentences “had no value” and the piece didn’t come across as “professional.” That’s probably true, given that the client told him he just wanted people to know he wanted to share his idea of beauty and potential with the world and not make it sound like a sales pitch.

When he came back with that feedback, plus demands that I completely rewrite it despite still only having vague client instructions, plus admitting the whole thing was worth $3, I said to forget it.

I thought I was rid of him forever.

But yesterday, an angry Barshi wrote back to tell me I was a liar about my work being original and unique.

The person to whom he submitted my vacuum cleaner review rewrites (don’t trust what you believe out there, folks) claimed they were not unique.

I am an honest person, to the point of too much honesty. Barshi even knew that, feeling comfortable enough on other occasions to tell me about his family and conditions in Bangladesh. He even gave me his account information when I needed to be paid once.

When the big, bad wolf of debtors came prowling around and he did not understand enough English to tell his client to stuff it, however, that rich man’s servant went skulking around for another to blame.

Mostly, I feel disappointed in my fellow writers. I’m talking about the proficient English-speaking ones, the ones who can write and who are agreeing to let people like Barshi ‘rent’ their accounts.

“I take rent from usa people,” he wrote. “Everybody helps me with out you.”

“Are you saying other people are fine with your renting their account?” I asked, to clarify.

Like I said: writing just ain’t what it used to be.