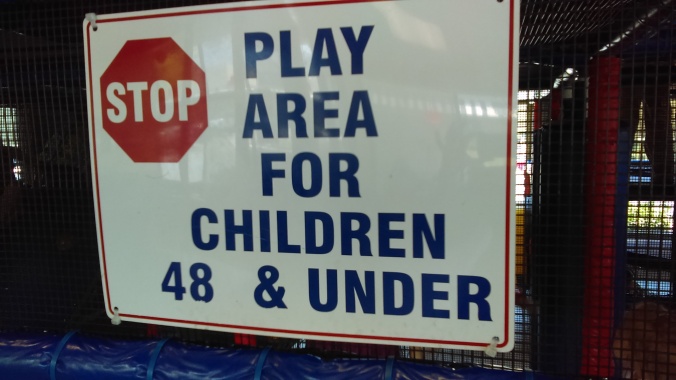 Last Friday I posted this picture and challenged my fabulous followers to come up with a caption. For those who might be curious, I’m fairly certain this was taken in Bountiful, Utah at a Carl’s, Jr. play place.

Thank you to all who entered; you are all winners and get a virtual trophy for your virtual shelf somewhere. 🙂 In fact, here’s a virtual high five from me for commenting and making everyone’s day brighter.

My favorite entry was from Jon, of Missionary Sojourn:

With a growing number of senior citizens failing to make it through the new Daniel-in-the-Lion’s-Den attraction, the zoo felt compelled to institute a new rule.

The other entries are below:

Magicquill: The sign’s wrong. They probably reversed the digits of the number in a hurry.

Bladud Fleas: Dear Mr. Blippi.
As you may have already guessed from the alterations, after some consideration, the producers have agreed to extend your contract for a further twenty years. We trust you are making financial arrangements beyond this time as we will then certainly be requiring a much younger man.
kind regards,
KidzTV

Bladud Fleas: Miriam and Darren had always desired original and unique names for their new twins and, as far as they knew, no one in their close circle had yet named their children “48” or “Under”.

Mr. Jon, if you would be so kind as to e-mail me at chelseaowenswrites@gmail.com, then I will hook you up with your prize.