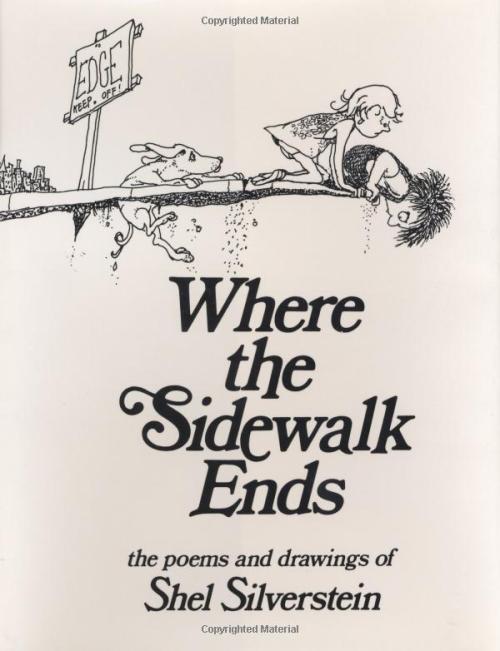 On December 27, I was faced with one of the greatest dilemmas for a bibliophile: picking a favorite book. The choice was to be made for my local book group, and had the further condition of being from the children’s category.

My only consolation for narrowing my 17 choices down to just one was that I promised myself to write about each -here, on this blog. I have therefore forgotten entirely about it since writing posts for King Bidgood’s in the Bathtub and The Adventures of TinTin.

Today I drove past an unusual sign. I’d have taken a picture, but that’s rather irresponsible driving while ferrying small children.

That’s why I did the safe thing and dug up this picture I took nearly three years ago.

At the sight, I couldn’t help but be drawn back to my childhood and to one of the best books of poetry ever: Where The Sidewalk Ends, by Shel Silverstein.

My mother read to us as children. She did so frequently enough that I remember, though not so much that I could say it was every night or even every month. Besides Ramona Quimby, Age 8, All Creatures Great and Small, The Water Babies, and Twig, she read quite a bit of poetry. Her favorites were The Cremation of Sam McGee, Bessie’s Boil, many of Ogden Nash’s shorter quips, A Child’s Garden of Verses, and many Shel Silverstein poems.

My favorite thing about the greatest children’s book authors is their ability to convey deep feelings and ideas in succinct, clever passages -passages even a child can understand. I respect their mastery of language. It is a great talent to funnel grand ideas down to fit neatly in the small spaces of a young mind.

I have acquired all of Shel Silverstein’s books of poetry over time, but Where the Sidewalk Ends is my nostalgic favorite for two reasons:

1. My family of origin owned only this book of his and we read it for years and years. It’s like the first dog we owned, and will always hold a special place in my heart for it.

2. Along with the text, we had an audiocassette of Shel Silverstein himself reading/singing/chanting his prose. When I read them to my children today, I hear his laughing voice and his background guitar strumming.

My children can’t hear him, poor things. Thank heavens for YouTube, in this case:

Not all of them were on the recording we had growing up, and fewer than those are currently on YouTube.

The man clearly had a wonderfully twisted sense of humor, and an amusing way of mixing and churning out rhymes. If you have not heard of Shel Silverstein, or only know of a few of his books, check out some of his others.

Runny Babbit is good. Or, The Missing Piece. Many people also like The Giving Tree. I go for his poetry the most: A Light in the Attic, Falling Up, and Every Thing On It.

He was an adult, of course, so don’t let any audio program just run wild with everything he’s ever written and performed. That’s your parental advisory right there. Don’t say I didn’t warn you. Wikipedia just told me he wrote a few things for Playboy. 😉

This month, our neighborhood book group is having a casual get-together; a potluck. “Bring your favorite children’s book to share,” the e-mail instructed.

Ah, favorites. I’ve mentioned them before.

Although, I don’t feel pressure to show off in my selection of a favorite children’s book. Instead, I feel an anxious inability to limit myself to just one.

I’ve even told myself I’ll only choose from picture books. Still, I’d have an easier time if, say, I’d been told to choose my favorite child (yes, I have a favorite).

After looking over our two bookshelves of children’s picture books, I’ve narrowed things down to a paltry 17 titles.

Dinotopia, by James Gurney
The Sneetches and Other Stories, by Dr. Suess
The Adventures of TinTin, by Hergé
The Jolly Postman or Other People’s Letters, by Janet & Allan Ahlberg
Where the Wild Things Are, by Maurice Sendak
Where the Sidewalk Ends, by Shel Silverstein
There’s a Nightmare in my Closet, by Mercer Mayer
Magical Hands, by Marjorie Barker and Yoshi
Oh, Were They Ever Happy, by Peter Spier
Le Livre de Bruits, by Soledad Bravi
Just Go to Bed, by Mercer Mayer
The Dot, by Peter H. Reynolds
The Story of Ferdinand, by Munro Leaf
The Napping House, by Audrey and Don Wood
Alexander and the Terrible, Horrible, No Good, Very Bad Day, by Judith Viorst
King Bidgood’s in the Bathtub, by Don and Audrey Wood (sadly, not pictured); and
Tuesday, by David Wiesner (also, sadly, not pictured).

This would be a long post, indeed, if I were to tell why each of these is significant to me.

The short answer is that I have an emotional connection with each: humorous, happy, relatable, impressed by quality, familiar -and all, save two, nostalgic.

I now realize I’ll need to devote an article to these, one at a time, in the future. They deserve nothing less.

In the meantime, how do I choose?

Once the hour arrives, shall I close my eyes and Eeny, Meeny, Miny Moe it? Point? Pick a number?

Well… what would YOU do if your (bookgroup) asked YOU?

I write for a content blog, something I had never done before this year.

When I began considering that I could be a writer, I had different ideas regarding that job’s requirements. I pictured book-conjurings, writing sessions, and pleasure.

I also behaved more jealously about the words I managed to type onto a screen. They were unique, mine, precious, and copyrighted. No one else could have these ideas, and no one should steal them!

Whatever I finally offered for reading would be gasped at, astounded over, praised profusely.

I basically pictured publishers saying, Why, Chelsea! This is amazing! Here is your advance check of $3M. No, we don’t expect you to work really hard to produce this book idea, since we know you have children and like to spend your free time playing games in your Steam Library. Ten years ought to be good.

Meanwhile, fans would pour in, complimenting me. Everywhere I went, people would stop and ask if I’d pose for a picture with them. Famous writers would hang out with me -no- beg me to come over for fireside discussions of literary devices.

This is really starting to sound like a trope daydream, so why would I actually feel this way? Oh, right -probably because many people have this fantasy.

Back to content writing: I took The Job because I was tricked.

A friend told me her daughter worked for a company and they were looking for writers. I was told I would write about 500 words each article about crafting, that I wouldn’t be making the crafts, and that I would only need to worry about the writing.

It involved MONEY for writing. Just so you know, writing doesn’t get you the advance check and the fame and such if you’re not putting yourself out there more than I’m obviously willing to do right now.

The reason I say I was tricked is that I actually have to do more than type words. I don’t have to make the crafts, that’s true. And, by the way, not making things is a great idea for someone like me -someone who had to make a Pinterest account in order to do this job.

I sure get sidetracked a lot, which is something that’s come up in trying to fulfill my contract and get paid.

*Ahem* I have a content-writing job. I write for a blog that steals other people’s images (with proper attribution), and lists them all under one user-loving title. Oh, I know you’ve seen them. The article is usually named “10 Eggcellent Easter Hunts.” Actually, that one would be too clever. Most are “10+ Holiday Crafts to Make with Kids.”

The trick part is that I have to spend nearly an hour tracking down these pictures, ensuring I give proper attribution. So many sites like the one I write for are cheating, simply linking back to Pinterest or not bothering to give credit at all. I can only take one image from an article, so I can’t simply steal all ten pictures from Suzy Stitcher’s Easter Egg Hunt (as cute as it might be).

1. Not being able to quit.
I’m getting writing practice, being paid, it’s super-flexible, and can’t I possibly buckle down and write five articles a week? C’mon, Chelsea, you baby. Woman up.

2. Relapse in similar settings.
In conversation with other women, I find myself actually interested in their descriptions of a craft they tried or a decoration technique they applied to their entryway. Horrified, I hear my mouth say, “I just wrote about that! Did you know you can find those birchwood wreaths at Target?”
I may as well hand them an affiliate link.

3. No control.
Whenever I have a few moments, I feel overwhelming guilt to get something done on The Job. It should take precedence, right? Must. write. boring. blog.
I have also found myself, inexplicably, walking into Hobby Lobby to peruse their latest glitter-painted yard refuse.

4. Medicating myself.
You’ll find out at some point, but I do not drink alcohol or coffee. Instead, you’ll discover a slew of candy wrappers discarded artistically round my still-warm headphones. Those, plus my exhausted upper half, are spread across a dirty computer desk at midnight.
I need deadlines and sugar for inspiration, and almost always resort to both to get the dreaded task done.

5. Desire without pleasure.
This is my NUMBER ONE problem. Typing heckling comments about birch sticks stuffed in a vase (a real thing) is not difficult. Writing five articles a week, on my own timetable, is probably the easiest job outside of door-greeter at Wal-mart.
In fact, I don’t even have to get dressed in a blue vest (and, hopefully, pants). I just have to be able to use my fingers to press buttons in a readable fashion.
So WHAT IS MY PROBLEM? Am I just a whiner?

I meant to write this post as a sort of exposé of blog-stealing blogs, and instead find myself stretched out on the proverbial psychiatric couch of the internet. No, dear internet, it was not my childhood. It’s my core disappointment in not tackling anything that takes longer than a mile’s worth of effort.

I don’t like writing for The Job. With that time, I could feasibly write my own stuff. I could write more on here, write my halfway-finished book.

From Where the Sidewalk Ends, by Shel Silverstein

We, creatures of habit, keep doing what we always have.

I know that I would not spend my paid-blogging time doing any such fanciful thing as completing my book. I would, most likely, decide that was a great time to start Breath of the Wild over and see how quickly I can get into the castle and beat Ganon.

Anyway, I’ve got some Pinterest to search. Apparently, Christmas is over and now I’ve got to write an article about romantic Valentine’s Day ideas.